With eight entries in the small-bore pistol iron sighs (SBP) the honours went to Hugh D who stole the show for the second time, winning last month too. Congratulations to Hugh who managed to hit a nine, an eight and a one, on the air rifle target. I had an idea that target would be the deciding factor in this shoot and it was! Honours went to Rex C in the (OSBP) competition. ‘Well done, Rex’.

It was a great turn out to what was a very enjoyable competition and I wish to thank everyone who turned up to shoot. Our next competition shoot will be on the 30th January 2022 and it will be our new Compendium shoot again with first shots off at 10:00. 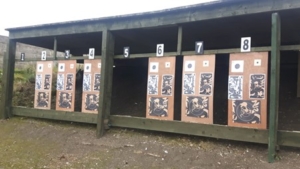