I wish to thank everyone who turned up to shoot what was a very enjoyable competition. Our next monthly competition shoot will be on the 31st July 2022. Looking forward to seeing you all then.

I know you all like photos , so the following photo shows 4 members of our club at the recent Naas IMVG Military show which took place last weekend. From Left to right, a current Greek Military officer, a Corporal from the 24th Regiment of Foot at Rourke’s Drift in South Africa, the Countess Markewitz in 1916 and Cap. Benjamin L. Willard from Apocalypse Now. The connection between the photo and the competition is shown by the revolver which has just been produced from the Countess’ bag although this particular example is only an Airsoft replica. 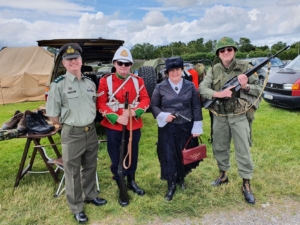