The NASRPC National Championship Finals were hosted in Fermoy, east county Cork, by the Fermoy Rifle Club last weekend. The NASRPC with the help from shooting clubs from the four corners of Ireland organise gallery rifle and pistol shoots throughout the year with the ten best shooters in each discipline who appear on the leader board being invited to shoot in the final national championship shoot at the end of each year. This year saw one hundred and twenty finalists from all over Ireland being invited to compete for national champion over twelve events. Each event has ten shooters who will battle it out for the honor of ‘National Champion’. In a lot of cases one shooter can qualify for more than one final. ECSC were very privileged to have had five of their members qualify for nine finals between them. This represented four competitors in the field sporting rifle event, three in the sporting rifle event and one in each of the Open Sights Pistol TP1 and Open Sights Pistol Multi Target.. Unfortunately, two of our members. Sean Mc. and Bryan P. could not attend due to family commitments. There were twelve discipline finals but our members who attended shot only in the sporting rifle events. ECSC have always prided ourselves with our ability to produce a high caliber of rifle shooter and this year’s final saw our three shooters win four medals in two events.

The day was overcast with the wind coming in from the south. The afternoon saw some rain but that did not deter the determination of our members to push for glory. The early morning and the first final of the day saw Asa R. become national champion, taking the gold in the ‘Field Sporting Rifle Championship’ with Anthony F. in second place taking the silver. Congratulations Asa and Anthony. Following on in the first final of the afternoon, the ‘Sporting Rifle Championship’, Asa R. took the silver medal this time with Hugh D. taking the bronze. Congratulations to Asa and Hugh. The gold medal and ‘National Sporting Rifle Championship’ went to Frank F. from BRC, congratulations to Frank on a victory well fought. All in all, both championship final shoots were very competitive and our members shot against the best of the best from other shooting clubs from all over Ireland.

No sooner has the dust settled on the ranges in Fermoy than the training starts again for next year’s NASRPC championships. ‘Congratulations’ and ‘Well done’ to each national champion and every shooter who made it to this year’s final and who took part in what was a very enjoyable event. Special thanks to Gerry McC who opened up the ranges for us, Fermoy Rifle Club, the NASRPC committee, the range officers, Mark and Nigel on the keyboard, the guys we had the laughs and jokes with and everyone who attended and made the finals an enjoyable occasion. We in East Coast Shooting Club look forward to meeting up with all you guys again soon. 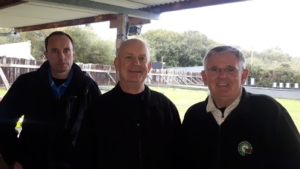