3 weeks ago, our club was fortunate enough to get a visit from  some of the crew of the, U.S.S. Cuchulain ,who arrived on earth at this time by accident. Most of our members who were not fortunate  enough to be on the range that day had difficulty believing what had happened. Well, what do you know, lightening does strike twice in the same place. It appears that a discontinuity in Hilbert space, caused by the first visit, resulted in a temporal twist which resulted in the first away party arriving  on our range 3 weeks after the second party had visited. This would not have happened if their ship has used the more modern Spore Drive which avoids such issues by using the reproductive spores of stellar mushrooms. We had no option but to start again, explaining why they were not where they intended to be but we would look after them anyway. It is not every day that you get visitors from 200 years in the future!

They had been stuck for a while in the temporal loop before arriving and were all very thirsty. We offered them some Earl Grey tea which was Captain Picard’s favourite tipple but some asked for Romulan Ale, Alderberan Whiskey or Slusho Mix. We  did have Lyons Tea in the red box which went down a treat.

The interest in ancient martial skills was equally as high as with the first group so the bows and arrows were distributed and the games commenced. Judging by the antics captured in the pics, some of them got over excited by imbibing Lyons red box tea! 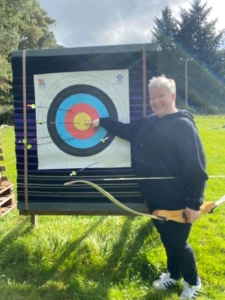