One of my jobs for the ECSC is to run the club’s digital communications network. This means that I usually receive the first contacts from people who are thinking about joining a shooting club and have found us by a Google search or similar. As this progresses, I invite them to the club to see our facilities, meet some of our members and try out some rifle shooting if circumstances allow. I instruct them in the security procedures and when to handle or not handle a firearm. I sit them down at a bench with a  scoped rifle supported front and back and show them the basics of hold and trigger activation and let them shoot at a 6 bull target at 50 metres, analyzing each bull as it is shot. I can usually see distinct improvements in group size as they finish the card. Further visits, with other coaches will develop the skills and help them decide if they want to take up the sport and join the club.

Once they are comfortable with what they are doing, the conversations soon move onto the equipment in use and lead to the topics for this article  which follows.

What kind of rifle should I buy?

The range of subjects soon widens to take in  ammunition, scope, rests, cleaning kit and all the supporting paraphernalia but these are for another day

WHAT KIND OF RIFLE SHOULD I BUY?

From here on in, the views are my own, supported by  40 years of experience and a lot of current research.

The first question in answer to the “what kind of”  question is what do you want to use the rifle for? If any type of hunting is in the response ,then very different considerations have to be made and I will not address them here. The following information primarily applies to target shooting only. In this case, the type of target shooting or discipline can dictate the choice. All disciplines have some rules which must be followed. The most frequent is total weight. In general, the heavier a rifle, the more accurate it will be, assuming the weight is in the right place, i.e. the barrel and action. In many disciplines, there are a number of classes which are dictated by weight. If you want to shoot Field Sporting Rifle in an NASRPC shoot then your rifle must weigh under 10.5 lb. The type of action is not specified. If you want to shoot Time and Precision 1, then the time limits for some sections indicate that a semi auto should be used.

The position used in the discipline also indicate some aspects of the rifle set up. Close range, timed disciplines are shot standing up , requiring fast acquisition of the target and low scope magnification.  The standing position indicates that the scope is positioned further back than  when shooting from a bench and the comb of the stock is high enough to give head support. FSPR is shot in the prone position with tiny bulls at 50 metres. This indicates high scope magnification and a scope which is positioned further towards the shooter’s eye.

If you shoot more than one discipline then you ideally need more than one rifle, or you reset your equipment between matches(difficult) or you set up a compromised position.

There are other variables but I will not go into them here.

So, now that you know how to set up the rifle, what type of rifle should it be? If speed enters the picture, then a semi auto has value. If not, then it should be a bolt action. There are copious discussions on all forms of media about whether a semi auto can equal a bolt action for accuracy. My personal experience , based on usage, engineering analysis and reviewing the media is that occasionally, in limited circumstances, fully tricked out, expensive semi autos might equal a bolt action on occasion but not consistently.

The essence of accuracy is consistency. You can improve consistency of equipment by spending money up to a point, then the usual law of diminishing returns set in. The bigger variable is you and that takes a lot longer to get consistent.

.22 Semi autos can have superb barrels, superb triggers, superb stocks and bedding, but what you can not change is the action. The bolt is held in place by a spring, recoils after firing and returns to battery. Any variation in when the bolt starts to recoil, or how quickly, will affect barrel pressure which in consequence affects accuracy. Springs wear in time. The temperature affects the viscosity of the lubricant which changes as the gun warms up. Some center fire semi autos have rotating bolt heads with lugs which go some way to address the problem, but not .22s.

In contrast, a bolt  action is locked in position throughout the firing cycle.

A little digression here concerning M4/M16/military looking semi autos. They look attractive, look like fun to use and are relatively cheap. Avoid like the plague. Any I have examined are cheaply put together with as much plastic as possible. The trigger pulls are extremely heavy, the barrels lightweight and a lot of the weight is cosmetic and serves no purpose. I weighed the trigger pull on one recently and it was over 12 lb in comparison to a very cheap bolt action which would generally be about 3 lb. This particular gun was branded with a well known name of a producer of accurate target type firearms. On examining the construction, the airsoft type construction origin was clearly seen, even down to using a thin barrel. Held inside an alloy outer tube which looked like a heavy barrel. Thin barrels do not lead to accuracy.

In summary, at any given price point, a bolt action rifle will be more accurate than a semi auto rifle.

It is very hard to wear out a .22 bolt action rifle. Mostly made of steel actions and steel barrels, especially European models by CZ, Anschutz, Feinwerkbau, Krico and many others. You can put hundreds of thousands of rounds down a .22 barrel. Cosmetic damage to the stock or metal parts are easily seen and repairable but do gave an indication of how well looked after the rifle has been. I have bought more used rifles than new ones and my experience has always been positive. If you have €500 to spend on a new rifle or a second hand €1000 rifle then choose the latter, especially if you know the previous owner or can try it out. The club you are in would be a good source of used rifles from other members and the rifle is easy to check out from the bench.

As a diversion, here is a video and some photos  of a rifle that is both bolt action and semi auto. It was made by Walther in the 1930’s and can still be found for sale. There was one on Guntrader in the UK for £695 today when I looked. I would like the opportunity to try it out on the bench and compare the groups 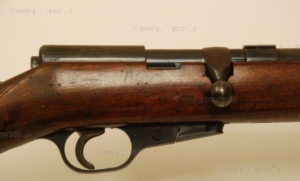