Sunday morning was overcast, dry, cold and foggy, but that did not deter  the twelve ECSC members who turned up to compete. The ECSC ‘Compendium 2’ was a surprise to many who shot last month’s ‘Compendium 1’. Just when they thought they had it easy, another air rifle target  was added.. HPS being 300.030. We had twenty-one entries across four disciplines. Mark O’D took over as RO on the first detail and for the rest of the morning Hugh D stood in to run the competition and allow me shoot. My thanks to both gentlemen.

The small-bore pistol iron sights  division (SBP) had eleven entries and for the third time in a row, the honours went to Hugh D with a top score of 169 x300. Not an easy competition by any stretch of the imagination. Don’t take my word for it, give it a try yourself. For the second time in a row the honours went to Rex C in the (OSBP) competition. ‘Well done to Hugh and Rex’. Three riflemen took part alongside our pistol shooters. They too found the target format challenging with the honours going to Bryan P who put in a respectable score with 217 x 300. I did say it wasn’t going to be easy. Everyone who took part enjoyed themselves in what was the last shoot of the year.

I wish to thank everyone who turned up to shoot. Our next competition shoot will be on the 30th January 2022 with first shots off at 10:00. I take this opportunity to wish all ECSC members and families a very “Happy Christmas and a very Prosperous New Year 2022”. 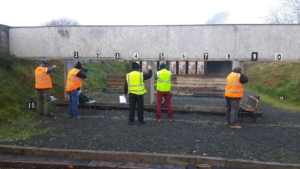 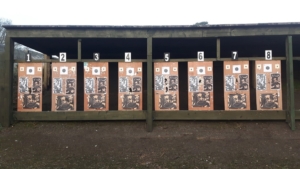 A Christmas Card to all members and Friends of ECSC.
Scroll to top