Blog - Latest News
No activity on the range during lockdown does not imply that there will be no activity on here too. We have an opportunity to share views, experience and skills . All it takes is someone to put up an article that may interest other shooters. I will practise what I preach by submitting this article about a rifle. I welcome any of you club members doing the same. All you have to do is send me an email with the text and photos you want included.
This Rifle started life as an Anschutz 1408 ED Super made in 1979. It is a single shot rifle built on the Match 54 receiver and was designed as to be used in the Olympic Running Boar discipline. This discipline is described below:
50 metre running target or 50 metre running boar is an ISSF shooting event, shot with a .22-calibre rifle at a target depicting a boar moving sideways across a 10 metre wide opening. Half of the runs are slow (target visible for 5 seconds), and half are fast (target visible for 2.5 seconds). The target can move left to right and the reverse. Target shown in photo below 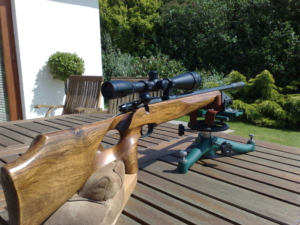 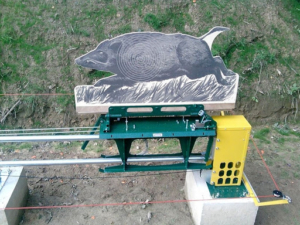 The rifle uses one of the superb match triggers made by Anschutz , the pull weight of which can be adjusted from a few ounces to 2 pounds. The barrel is 18 inches long with a length extender of 6 inches which is designed to carry adjustable weights. The original stock is adjustable for length of pull, cheek height and but plate position
I first came across this type of Rifle on a trip to a range in the UK. The man next to me on the firing line was using one of these rifles in a lovely Walnut stock he made for it himself. We got talking and it turned out that he had shot Running Boar in the Olympics for the UK and had made the stock now fitted to the rifle so that it met the Rules for shooting silhouettes. I had a notion to do the same and asked if he might sell the stock. The answer was no. I met him again at the same event in subsequent years and two years later, he had made another stock for his rifle and sold me the first one. I now had a stock with no barrel or action and this is how it stayed for another 4 years until I came across an advertisement for a used 1408 ED Super in a UK shooting magazine. I bought the Rifle, sight unseen, and had it imported by a firearms dealer here whilst I applied for the licence. A few weeks later, I saw the rifle for the first time and was delighted. It was in very good condition and had been professionally modified by the addition of an Anschutz target rail, inletted under the fore end for fitting accessories.
I now had a multi purpose kit that could be set up to meet the rules for a variety of shooting disciplines including;
ISSF Target Rifle, iron or scoped sights.
NASRPC prone and standing precision gallery Rifle.
Metallic Silhouette SBR class.
The rifle can be used with or without a single point sling, a bipod or on a front rest. The overall weight can be adjusted with the barrel extension and weights and the stock is easily changed, with little effect on scope zero between the various disciplines. 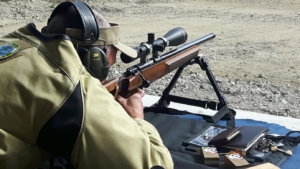 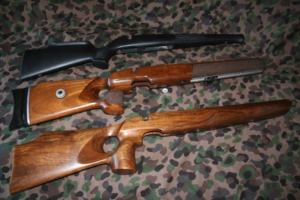 The last addition was a Cicognani bench rest stock, designed to be used with a rear bag and front rest for the Bench Rest disciplines. The scopes used are Leupolds.The distances shot in the various forms of competition vary from 25 to 100 metres and the Leupolds I use will do this. Many scopes on the market, even very expensive ones, will not focus under 50 metres. The ammo used is mainly SKC red box, Rifle Match which has been batch tested for the rifle. This ammo has proved consistent and tight and will shoot possibles if I am up to it 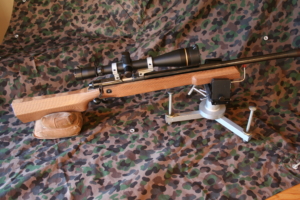 Range Closure from today. My Favourite Rifle No. 2.
Scroll to top