This interesting historical rifle and how it has been cherished and brought up to date was contributed by ECSC member Simon C.

This is my Remington Model 34 rifle which I took over at the end of 2015. It had belonged to my father and before that it belonged to his uncle. The rifle was manufactured in April 1935 and has been in our family since at least 1943.

My grandfather died when my dad was only a small child and his uncle became a father figure for him. My dad’s uncle had an allotment in the Featherbed Bog and the two of them used to go cutting turf for fuel for the winter. My dad’s uncle had a US Army surplus pickup truck (this was immediately after the Second World War) which had a gun rack in the cab and the rifle always travelled with them when cutting turf . They used to shoot rabbits for the pot, apparently my dad’s uncle was a terrific shot and could hit a running rabbit quite easily just using the open sights fitted to the rifle. I read a comment on Rimfire Central about depression-era .22 rifles being used to put meat on the family table all across America and knowing the back story around my rifle it really resonated with me.

My dad’s uncle passed away in 1970 and dad inherited the rifle. He had a scope fitted to the rifle which wasn’t completely straightforward as it doesn’t have a dovetail rail. The work was carried out by Johnny Carr who was a gunsmith whose shop was on Pearse Street, beside the back of the old Tara Street fire station, what is now the Trinity City Hotel. The receiver was drilled and tapped and a sidemount bracket attached which required the bolt handle to be machined slightly, it was bent downwards to sit closer to the stock and a section of it was filed flat to clear one of the screws on the scope mount.

I learned to shoot with that rifle as a child of about 5 or 6. There used to be an Army shooting range at Ticknock Forest on Three Rock Mountain which is very close to home and after dad came home from work we used to go shooting there on summer evenings when it was quiet, although on occasion we would arrive up to see red flags flying and an army vehicle blocking the entrance to the forest because the range was in use.

Family holidays in those days included camping trips around Ireland and the Remington would always come with us. We used to go plinking on deserted beaches and occasionally tried shooting pigeon although I don’t ever remember hitting any.

When dad turned 80 a couple of years ago he decided not to renew his firearm certificate and asked me to take over the Remington. It had been sitting unused in the safe for many years and with licencing requirements tightening up dad decided that it was time to give it up, but as it is of great sentimental importance to him he didn’t want it destroyed or deactivated so he asked me to take it over, and that brought me to East Coast Shooting Club.

The Remington was in good condition as it had been stored lightly oiled and with a dehumidifier block in the safe. The scope however was a different story, the optics had degraded and it needed to be replaced. This was a problem as the original scope had a 3/4″ tube and I couldn’t find a suitable replacement which would fit straight into the mount. The original scope was also fitted sideways to allow the bolt handle to clear the turrets. So instead of the normal configuration with the elevation adjustment on the top and windage on the right, the elevation turret sat on the left and was used to adjust for windage while the windage turret was on top and used to adjust for elevation.

Johnny Carr was long gone and I hadn’t yet joined ECSC so my research all had to be done on the internet. The original scope mount was stamped “N3” which I discovered was manufactured by Weaver and they have a very useful chart on their website listing the mounts they make for a huge range of firearms, including historic rifles like the Remington Model 34:

Whatever you own, Weaver can put a scope mount on it.

I was able to order a suitable side mount base and detachable bracket with 1″ rings from Brownells, along with a step for the rear leaf sight. The base had exactly the same pitch for the mounting holes as the original sidemount bracket and it just screwed straight on with no problem. The bracket seemed to be a perfect match for the Hawke scope I had bought, right until I tried fitting the bolt into the rifle and discovered why the previous scope had been fitted sideways. The windage turret fouled the bolt handle quite badly, far in excess of what could be dealt with by further modifying the bolt handle. The bolt handle on a Model 34 is midway along the bolt rather than at the rear of the bolt as on most modern rifles so it needs to pass under the scope rather than pass behind it.

Being an Engineer, I came up with an engineering solution which didn’t involve any further machining of the rifle. I used a 1″ diameter aluminium billet which I cut and milled to make a semi-cylindrical piece with a flat top which would sit into the scope rings. The scope rings were machined to turn them into open cradles and the aluminium billet was drilled and tapped for machine screws to hold it in place. The top of the aluminium billet was machined to hold a short section of Weaver rail which would then accept standard scope rings. As the scope now would now sit quite a bit higher than the original design intended I used a set of very low scope rings to drop it down as low as possible to clear the bolt handle.

The result is a scope that sits a little higher than on a benchrest setup but not significantly higher than the mount I have on my CZ455 for shooting silhouette, it looks a little unwieldy but it works and is actually very comfortable in use.

The other task I had to undertake was to limit the magazine capacity.   Rather than try to shorten the magazine tube, a far simpler solution (when I eventually managed to drive out the pin holding the magazine cap in place without damaging anything) was to insert a length of brass rod into the inner magazine tube to act as a restrictor and prevent the magazine being closed if more that 10 rounds are loaded. The brass rod sits inside the magazine spring so it doesn’t cause any additional strain on the spring by pre-compressing it. The curious thing is that the length of brass rod required is equivalent to 8 rounds of .22LR rather than the 5 rounds I had expected.

While going all of this I tried to find out a bit more about the history of the rifle and how my dad’s uncle came to own it. While Remington were quite helpful, they confirmed the manufacturing date was April 1935 and provided me with a copy of the owners manual, they refused to tell me who it had been supplied to when it left the factory citing “security reasons”. It would have been interesting to find out whether it had originally been supplied to a dealer in the US or if it was exported.

The rifle is now 86 years old (older than my dad) and still shoots quite well. I only use it a couple of times a year and obviously accuracy isn’t anything like that of my CZ455 but the group sizes come down noticeably when it warms up a bit after 15 or 20 rounds and it can still hit the Rams in the silhouette bays. 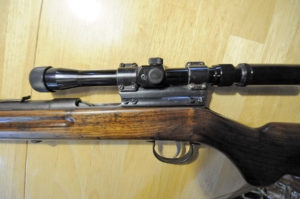 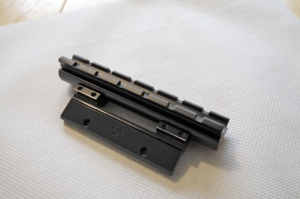 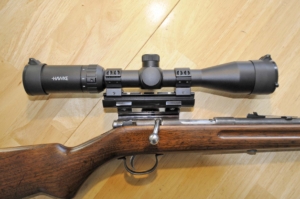 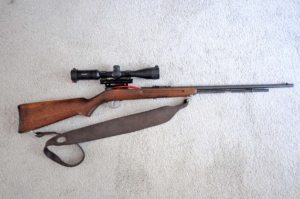 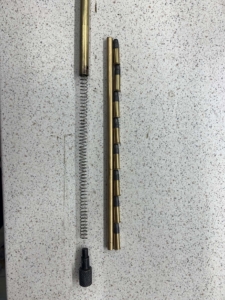