Considering the times that are in it and the number of members who could not travel from Dublin, the attendance at today’s shoot was good.In general, the range has been quieter than usual since the Dublin Level 3 lockdown, which is very understandable. Today we had just over half of the usual numbers for a Sunday, spread across the Shotgun, Rifle and Pistol ranges. As some of  the members who usually organise events were unable to attend, it was very pleasing to see how other members stepped up to the mark and took over running the ranges. Proper social distancing was observed and no groups were allowed to form. Thank you to all.

We had 5 entries for the Pistol shoot which was an all calibre, all sight affair, considering the attendance.  The format was the same for both Pistol  and Rifle shooters, the 25 Metre precision competition, This consists of 4 cards, each of which is shot in 3 minutes. The first card is unlimited sighters and not scored. The next 3 cards are 10 shots each in 3 minutes. The target size is very different for pistol and rifle. The photo below shows the two targets side by side.

The weather was very good , making target visibility bright, which was good for Iron sight users and a problem for optical sight users. Results are shown in the table below. 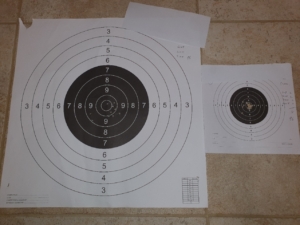