The usual small but dedicated group braved the cold and windy weather to attend.  The wind was strong and blustery, blowing generally into the faces of the shooters, but fishtailing significantly as well.  Nevertheless some of the shooters threw down the gauntlet by electing to shoot scratch, i.e. electing to forego the handicap on offer, this being a CYO competition, and in the end it paid off for a couple of them.  But the scores were a lot lower than last year.

The competition was shot over the Dewar Course, i.e. 20 shots at 50yds (shot by us at 50 metres) and 20 at 100 yds.  The first prize was, appropriately and traditionally, a bottle of Dewar’s whisky, and it was won by Sandy W.

The results, after adjusting for handicap, were:

Special thanks to Sean, on account of whose catering efforts we concluded the shoot with a lunch of a hearty vegetable soup (very welcome on a cold day), rolls and mince pies.  And yes – as in previous years the whisky stayed in the bottle as we were all driving home afterwards. 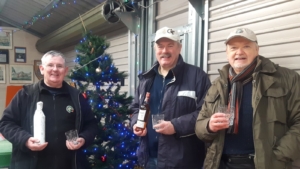