Last weekend, in the NASRPC National Competition held at the Midlands National Shooting Center of Ireland, our club achieved a notable success in 4 Rifle competitions. Two of our members won 2 first places, a second and a fourth  place, in a wide range of different formats. Making it more interesting is the fact that one of these members has been a member of our club for 42 years and the other has been a member for one year. The new member is ASA Red. who has made a significant contribution to the club in many ways, since joining. The long serving member(i.e., old) is Sean McE who has managed to continue competing at the highest level despite not being a Spring Chicken. This should provide inspiration for all already involved in the shooting sports or even just  thinking of taking up target shooting. Age does not matter as much as it does in most sports. Start early and continue for many years. Asa also achieved a notable distinction by setting a new National record of 399.034 out of 400 in the Field Sporting Rifle 50m Prone (FSPR50) competition. A photo of one of his targets, recording a score of 200 out of 200 is shown below. Very well done ASA! The scores are shown below. Also shown below is a library photo showing Asa on the far left and Sean 2nd from the right. 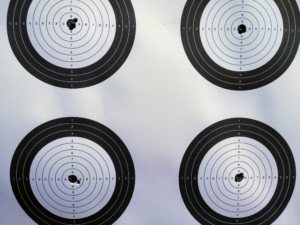 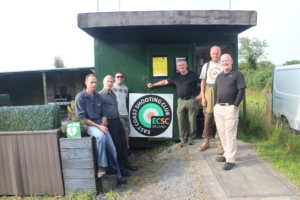