The Keil Cup  was inaugurated in the 1980’s as a competition run on a club team basis between all NASRPC clubs who wished to participate. The format is 2 paper targets of 20 shots each at 50 Metres (the highest scored target to count),  plus 20 silhouettes at the usual distances. The teams consist of 4 individuals and the  3 highest scoring individual’s scores are counted for the team’s entry. The competition was held on the ranges of the BRC club at Bohernabreena, Co. Dublin.

7 teams were entered from 5 clubs. ECSC entered 2 teams. We have not competed in this competition for over 20 years but we made a triumphal return today with one of our teams winning by a margin of 53 points.  We were 17 points behind on the paper stage but were 70 points ahead on the Silhouettes.This was a great achievement for us as we would not be known as a club that specializes in prone 50 Metre shooting. The stand out shooter was Nicholas F. with an excellent score of 193 out of 200 on the paper and 18 silhouettes out of 20. The photos show the ECSC members who made up the two teams. Congratulations to all of them. 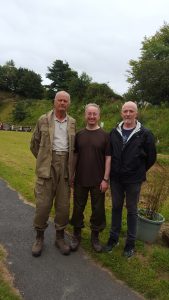