Ralph L. organised a speciality Xmas format for our regular Silhouette classification shoot which takes place on the third Sunday of every month. Instead of the usual standing format. this competition was shot from a bench rest position on paper targets which were the same size as the usual metal targets. These targets can be seen in the photo below.  Each is printed on an A4 sheet of paper. The black dot counts as 10 points, the outer circle as 9 and a hit anywhere else on the silhouette counts a 8. A miss is a miss and counts for nothing.The competition was shot under the usual timing rules for Silhouettes with 2 min 30 sec for each 5 shots  and 30 seconds between relays. 2 shots are fired on each of the chickens, 5 on each of the pigs and turkeys and 10 on the ram. The square on the chicken target is used for zeroing in the first 2 and 1/2 minute relay. The targets were shot at the usual distances of 40 metres for chickens, 60 metres for pigs, 77 metres for turkeys and 100 metres for rams.

In addition to the regular attendees from ECSC, we had two members of the Suirside club and one member from BRC who attended. The weather was very cold with flurrys of snow and sleet but no wind. Two classes of rifle were used, SBR and SBHR. The SBR rifles used were Anschutz 54-18s and the SBHR were Anschutz 1710, 1712 and CZ 455 and 452. The advantage of the SBR’s can be see in the scores shown below. 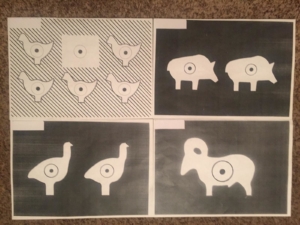 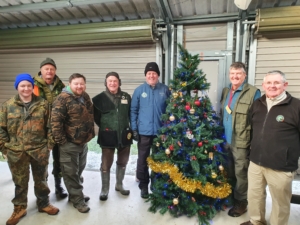 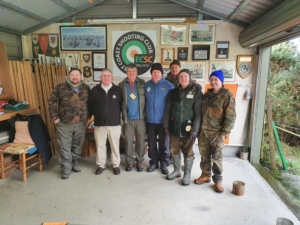